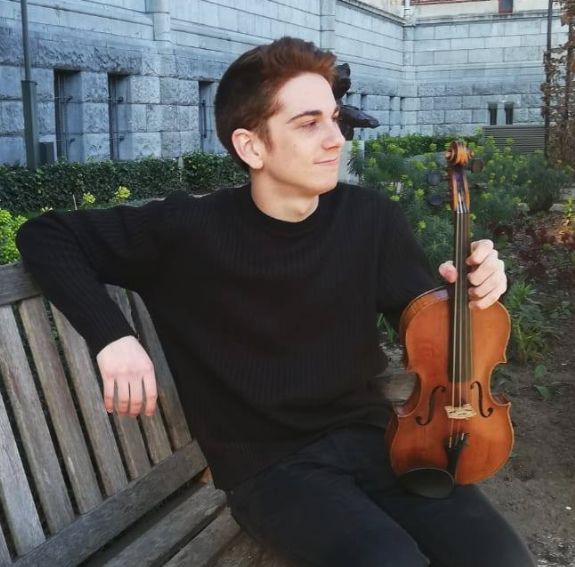 Carlo Allegri Rodríguez is a violinist born in Milano, Italy on October 1, 1998. Currently, he is living in Belgium and studying violin with the professor Eliot Lawson. He has completed his first bachelor’s year at the Conservatorium van Amsterdam. Previously, he completed a 6-years degree in violin at the Professional Conservatory of Music Manuel Carra in Málaga (Spain). Also, he has worked in Málaga as a teacher in a music school between 2014 and 2016.

Carlo attended to violin masterclasses by Maria Rosaria d’Aprile, a violin student of Massimo Quarta, Vineta Sareika, Ani Schnarch, among others. Also, he has played in several orchestras: as concertmaster at the Symphonic Orchestra CEEM (Experimental School of Málaga), as 1st violin at the JOL (Youth Orchestra in León) as 1st violin at at the Symphonic Orchestra JOPMA (Provincial Youth Orchestra in Málaga), and also, he has performed with the Philharmonic Orchestra of Granada, among others. On Summer 2018, he played as a soloist, touring in France for a week.

He won a prize as best performer at the Musical Contest “María Ángeles Reina”.

“First of all, why did I need theory lessons? In my case, I had to prepare for the entrance exam to the Conservatorium van Amsterdam back in 2017. Thanks to Bohdan, I achieved a solid level in a short time, because of his approach to teaching: friendly, but at the same time demanding. The subjects and topics that were covered in our lessons were handled with complete control. He had a thousand ways for explaining concepts so that one could learn them, whether it was with the help of online resources or by means of his own methods that he prepared for me. Before starting lessons with him, I was scared by the fact that I had to take online music lessons via Skype, but there were no problems, since he is fully equipped, and he has experience. That year, I’ve entered with the grade very good to the Conservatorium van Amsterdam” – Carlo Allegri Rodríguez on his music theory lessons with Bohdan Syroyid